Many aspire for the Nurburgring crown for the world’s fastest SUV, and Alfa Romeo has captured that title with the Stelvio Quadrifoglio.

The halo version of the Stelvio lapped the ‘Green Hell’ in just 7 minutes and 51.7 seconds, posting the fastest time ever for a production SUV, smashing the previous record initially held by the 542hp Range Rover Sport SVR (8:14) before losing it to the previous generation 562hp Porsche Cayenne Turbo S (7:59.74).

It also matches the best lap time for the BMW M4, although it does fall behind the world’s fastest front-wheel drive model, the Honda Civic Type R (7:43.8).

“We specifically engineered and designed the Stelvio Quadrifoglio to set world-class benchmarks and it did not disappoint with a world-record Nürburgring lap time of 7 minutes and 51.7 seconds,” said Reid Bigland, Head of Alfa Romeo. “

At the heart of the Stelvio Quadrofoglio beats a 2.9-liter twin-turbo intercooled V6 engine, producing 505 horsepower and 443 lb.-ft. of torque, that works together with the standard Q4 all-wheel-drive system allowing the SUV to hit 60mph (96km/h) in 3.9 seconds and top out at 177mph (285km/h).

The Stelvio Quadrifoglio will arrive shortly at Mangoletsi, but you can test drive the Stelvio now. Click here to arrange your own drive! 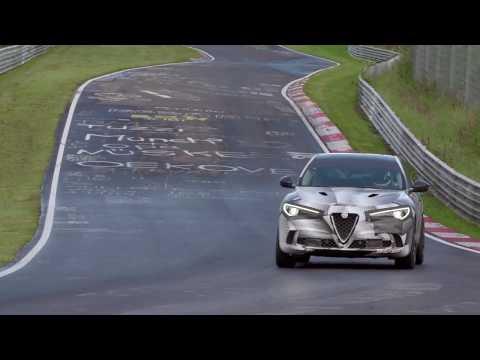