Alfa Romeo has revealed the three trim levels at the European launch of the new Stelvio. Its European debut comes just days before the Geneva Motor Show and in the UK the model will be available in three trim levels - Stelvio, Super and Tecnica.

With a 2.0-litre turbocharged petrol engine it offers 280bhp and the four-cylinder unit combines an automatic eight-speed transmission and Alfa's Q4 all-wheel drive system. The engine gives acceleration claimed at zero to 62mph in just 5.7 seconds and on to a top speed of 143mph. CO2 emissions are rated at 161g/km which equates to 40.1mpg.

The Stelvio will also be available with a 2.2-litre diesel engine with two power outputs: 210bhp at launch and 180bhp following shortly after. It is the first diesel engine in Alfa Romeo's history to be constructed entirely in aluminium and has just made its debut in the Giulia sports saloon.

The Stelvio features a lot of high tech equipment and the Alfa Connect system – developed in partnership with Magneti Marelli – has the latest-generation HMI interface controlled from a rotary pad on the centre console.

The infotainment system controls the DAB digital radio and also provides a Bluetooth system for hands-free communication and playing audio from USB and smartphones devices. The entire Stelvio range is supplied as standard with an 8.8-in display with optional Connect 3D Nav which supplies navigation with high-resolution maps and high-speed route calculation.

An audio system featuring four woofers and four tweeters is also standard across the range. Prices and a precise on sale date for the new Italian luxury SUV are still to be announced.

You can see a video of the Stelvio in action below. 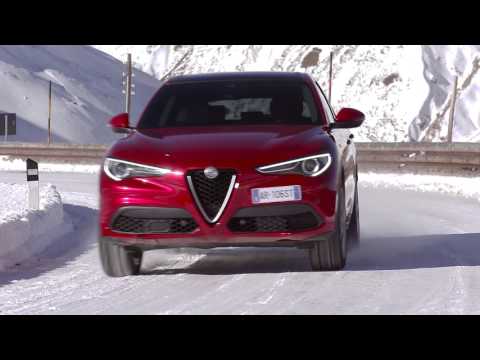